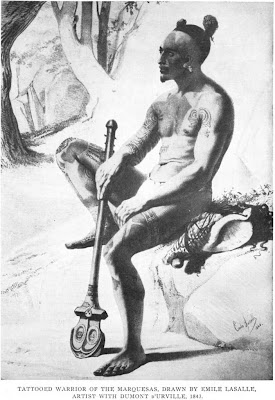 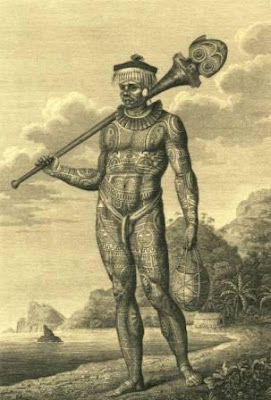 The tattoos of the inhabitants of the Marquesas Islands fascinated the French explorers. Though the practice was outlawed by the French officials that took over the area, the tattooing practice still continued as it was a symbol of success within the tribes. When the French came to this region, the set up of their tribal societies were quite unlike those that the French were used to. They were egalitarian in nature and numerous different sectors of society (shaman, warrior, property owners) could gain persuasive power without their position acting as a inhibiting factor. There was one instance in which a missionary asked where the king was and his response was:
"You are king. I am king. We are all kings."
Pretty cool society, no? The same policy for ruling went with the practice of tattooing. Gender, rank, or profession did not dictate the art one placed on their bodies. However, the wealthier one was, the better artist they could hire and support during the process of tattooing. Yet, it was not essential, not used as a clear marker of class or rank. Some of the most respected religious figures in the tribe remained un-inked, showing that, like today, it was a personal choice specific to the person.
Posted by Art & Culture 104 at 9:25 AM