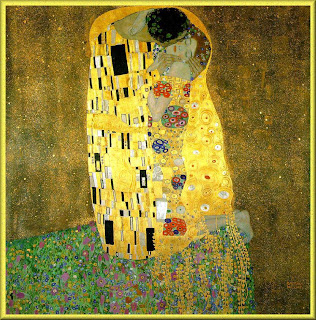 The work of Gustav Klimt, the Austrian painter most known for “The Kiss,” focuses on the depiction of the irrational, but in a way that relies on the rational. Klimt is most famous for his ‘Golden Phase,’ the period of time in which he created works heavily reliant on gold-leafing. This period is the one in which “The Kiss” was created as well as many others that utilize the same blanketing gold and smattering of designs to cover up the bodies and positioning of his subjects. While these paintings rely on actual human subjects and familiar objects as their subject matter, what in turn dominates the painting is the presence of his asymmetrical, random designs. There is a freedom given to his viewing audience as well in covering up the areas of the body that would tell a story through their action. He has clearly rejected the naturalistic style and aimed to use the body as a canvas for conveying a sense of freedom that visually breaks with tradition.
Posted by Art & Culture 104 at 1:21 PM