Translated, this piece is titled The Altar of Augustan Peace. It was consecrated in 9BC after being ordered by the Senate to commemorate the victorious homecoming of their emperor Augustus, coming from triumphant military endeavors in Gaul and Spain. It was a reminder of this Augustan Peace that their emperor sought to establish, though ironically by waging war with other "uncivilized" nations. 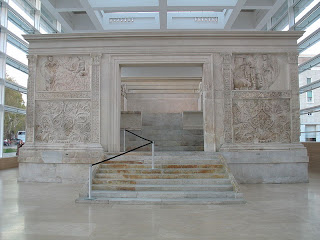 Composed of marble and carved with many relief friezes, the altar mainly depicts the procession and sacrificing done by the family of Augustus to honor the gods, further instilling their reputation with qualities of extreme piety and devotion to the state gods. The people that are carved into this altar are not just idealized images of youthful bodies. Some of those processing are still recognizable today as distinct individuals connected with Augustus' rule. Augustus's Peace Altar was not only just to glorify his doctrine, but to also speak to the basic important rituals and ideals that formed the nucleus of Roman culture.
Posted by Art & Culture 104 at 8:46 AM