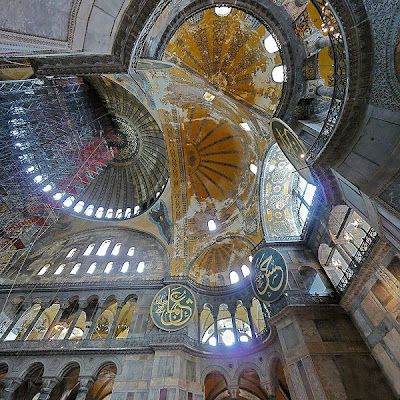 Hagia Sophia originally began Orthodox church. Since its dedication in 360, it has gone from Orthodox, to Roman Catholic, to an Islamic mosque, and then finally to a secularized museum. It was originally dedicated to the second person of the Trinity. For a while, it was the largest cathedral in the world, famous for its Byzantine architecture and massive dome. When Muslims look over the Hagia Sophia, it was renovated and repaired numerous times. The original chandeliers were replaced and mosaics cleaned up or discarded. It began to take on the decorations of this new faith with its columns sporting calligraphy of important Muslim figures, like Muhammad, the four caliphs, and Muhammad's two grandchildren. In its final restoration as it was transformed into a museum, the carpet was removed and marble floors added. The plaster covering many of the mosaics was painstakingly removed and they were restored. The current structure today still shows signs of its many faiths and worshipping inhabitants throughout its lifetime. 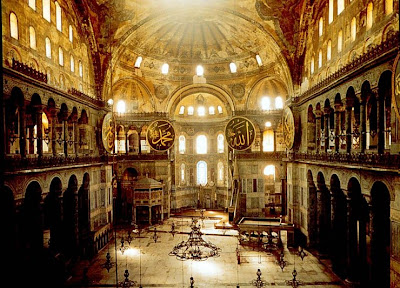