Departure of the Volunteers, Rude 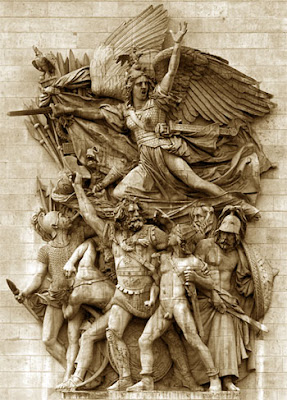 Rude was a great supporter of the Bonaparte ideals and was called upon the complete the Arc de Triumphe in 1833. He was given the task of immortalizing the actions of French Volunteers who on their own accord mobilized and defended the Republic. Rude had a personal connection with this being that his father had been one of those many volunteers and Rude had been involved in the mission of this swelling group at the time, a member of the young boys volunteer group himself. Rude took the fairly recent scene and casted it back into the mythological context. Above the volunteers nude or clad is Grecian armor is the ever-popular symbol of the revolution: Liberty. She is reminiscent of the Winged Victory now housed at the Lourve and perhaps a clear connection between the two was intended--that liberty delineated victory.

Rude's relief work on the Arc was well-received by the French people. They called it the Marseillaise rather than its formal title, aligning it with what became France's national anthem, but what began as the theme song of the revolution.
Posted by Art & Culture 104 at 8:22 AM