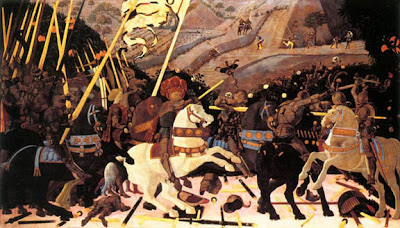 The battle is not very realistic at all. The order of the men fighting and even the spears laying on the ground are in a linear order. While the foreshortening of the horse is impressive, the way in which they are arranged lends one to believe that they were simply painted separately as individual works, instead of characters and animals that were interacting together. The colors really don't do anything for me either. This painting depicts the battle between Florence and Siena. What is politically interesting about this piece is that both sides considered it a victory. So, by painting this scene in favor of one or the other, the artist is really making a bold political statement.
Posted by Art & Culture 104 at 2:00 PM