Built from 848 to 852, this sandstone tower is part of one of the biggest mosque in the world. The tower used to be connected to the actual prayer building by a bridge that no longer exists. The name Malwiya actually pertains to the shape of the structure. It means "snail shell" and is clearly obvious as to why the structure has been dubbed so. 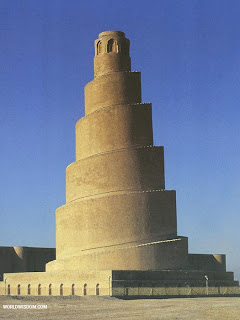 The structure is often times assumed to be a tower used for the call to prayer, but due to its extreme height it was actually impractical for such a use. Instead, it was just a statement piece, speaking to the presence of Islam in that area. There is a room at the top of this tower with eight arch windows though, that is used as a lookout point. In fact, in recent years, it has been used by American troops as a lookout point. That is a contributing factor to its current damaged state. Knowing that US Troops used this tower for such a purpose, it has been bombed by opposing forces often and so the top room and spiral staircase has been damaged.
Posted by Art & Culture 104 at 11:42 AM