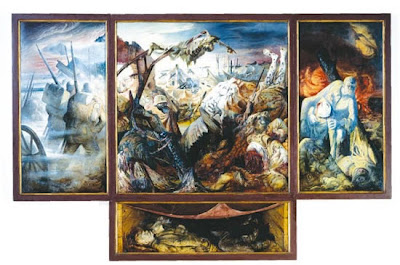 The German artist, Otto Dix, also confronts his audience with unpleasant images that ultimately deliver the same aftertaste of disgust. In his triptych entitled Der Krieg (The War), Dix  captures the destruction of war on both the land and the bodies of young men. There is little trace of life in the entire piece. Even the marching soldiers appear in the left panel appear ghostly and dreamlike as does the character that he said to be himself in the far right panel. One cannot distinguish whether or not the horizontal soldiers at the bottom of the middle panel are sleeping or dead, but their greenish tint helps to encourage opinions of the latter. Life appears a frozen, distant inaccessible reality and there is no shortage of the gory details of war that The Battle of Issus and The Death of General Wolfe were lacking. When one consults Dix’s own commentary on his work, the message he is sending is not necessary a revolt against all war, but instead a concentration on its honesty reality. As a volunteer soldier for World War I, Dix has this to say about his experience with war:
“I had to experience how someone beside me suddenly falls over and is dead and the bullet has hit him squarely. I had to experience that quite directly. I wanted it...I had to see all that myself. I’m such a realist, you know, that I have to see everything with my own eyes in order to confirm that it’s like that. I have to experience all the ghastly, bottomless depths of life for myself…” (NGA)
Dix appears more concerned with portraying things the way they are in reality, and yet it is this reality that has the power to influence the choices and beliefs of a decision-making body. Therefore, through his art, Dix is providing powerful, seemingly direct commentary without intentionally meaning to; he is simply portraying “states, states that the war brought about, and the results of war, as states” (Kleiner, 942). A series of Dix’s etchings under the same name emit the same echo as  the larger piece. “This nightmarish, hallucinatory quality pervades all of the Der Krieg images. Paradoxically, there is also a quality of sensuousness, an almost perverse delight in the rendering of horrific detail, which indicates that there was perhaps, in Dix’s case, an almost addictive quality to the hyper-sensory input of war” (NGA).