The Good Shepherd, ceiling of Catacomb of St. Peter

The catacombs in Rome are where the Christians would bury their dead. The political climate of that time dictated secrecy and so Christians were forced to bury their dead secretly. The catacombs of Peter can be found on Via Labicana in Rome. They are located close to a Catholic church by the name Santi Marcellino e Pietro, named specifically for the Christian martyrs believed to be buried in those specific nearby catacombs. 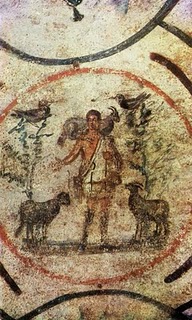 Depictions of Jesus as a good shepherd are found in more catacombs that just that of St. Peter. It's the literal interpretation of the metaphor found in the Bible, about God and his human and divine son, Jesus, and the relationships with astray humans. These symbols clearly mark the graves of the deceased according to what faith they followed during their lives. They acted as symbols of unity between persecuted brothers and sisters in Christ.
Posted by Art & Culture 104 at 10:08 AM