Lange worked for the Farm Security Administration during the Great Depression, working to bring the real, raw images of the hard times gripping the country to the masses. This photo gained popularity as it displayed the truth of the situation. The woman's name is Florence Owens Thompson. While Thompson's son disagrees with some of the details in Lange's remembrance of the moment she met and shot Thompson's image, it is still an interesting recounting worth including in this entry: 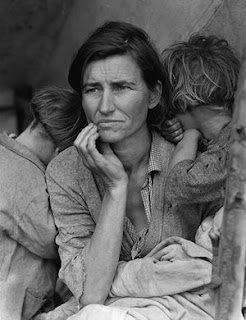 I saw and approached the hungry and desperate mother, as if drawn by a magnet. I do not remember how I explained my presence or my camera to her, but I do remember she asked me no questions. I made five exposures, working closer and closer from the same direction. I did not ask her name or her history. She told me her age, that she was thirty-two. She said that they had been living on frozen vegetables from the surrounding fields, and birds that the children killed. She had just sold the tires from her car to buy food. There she sat in that lean-to tent with her children huddled around her, and seemed to know that my pictures might help her, and so she helped me. There was a sort of equality about it.


After Pearl Harbor was bombed, Lange worked to photograph the injustices against the Japanese as internment started to take place. Her popularity with the government declined during those years when she strove to criticize their decisions through her photography.