Argueably one of the most famous pieces of Christian relief sculpture, the sarcophagus of government official Junius Bassus depicts scenes from the Old and New Testaments. There are numerous scenes with Jesus teaching, interacting with his disciples, and even with Pilate. It's interesting to see the infusion of Italian culture, and even pagan culture, into the carvings of this sarcophagus. Pilate makes a hand gesture that is meant to ward off evil spirits and there is a picture of the emperor over the head of carved officials, just as in the Roman courts. The merging of the two belief systems is especially interesting when you consider Junius' role in Roman society and the fact that he converted to Christianity extremely close to his death, perhaps even on his deathbed. 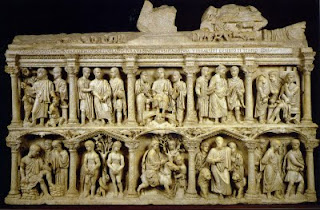